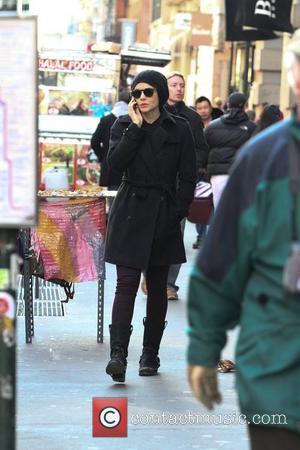 Picture: A well disguised Carey Mulligan talks on her mobile phone while out walking in Soho New York City, USA - 06.03.12

Carey Mulligan, Kevin Spacey and Philip Seymour Hoffman are among the Hollywood stars who have been nominated for Drama Desk Awards in recognition of their New York stage performances.
Mulligan's turn in Through a Glass Darkly has landed her in the Outstanding Actress category, which also includes fellow Brit Joely Richardson (Side Effects).
In the running for Outstanding Actor, Spacey (Richard Iii) and Seymour Hoffman (Death of a Salesman) face competition from the likes of James Corden (One Man, Two Guvnors) and Hugh Dancy (Venus in Fur).
Pop star Ricky Martin has nabbed a nod for Outstanding Actor In A Musical for Evita, which is also up for the Outstanding Musical Revival crown.
The 57th annual Drama Desk Awards look set to be a big night for Broadway production Follies and the off-Broadway show Death Takes a Holiday - both landed 10 nominations each.
The trophies will be presented during a ceremony at The Town Hall in New York City on 3 June (12).