Tweet: "Happy 9th anniversary baby. We may not be you (young) and dumb, but we still got fire!!!! Love you baby." Motocross racer Carey Hart marks his wedding anniversary with pop star Pink.

Fact: Pop punk Pink has turned her new video into a family affair after recruiting her husband Carey Hart and their baby daughter Willow to appear in True Love, the singer's collaboration with British star Lily Allen, aka Lily Rose Cooper.

Tweet: "Got the most amazing B Day (birthday) present from Pink!!!! Wow, I'm speechless. You are the best baby. I love you so much... This thing is gonna be bad a**!!!" Pink's husband Carey Hart is delighted after the pop star bought him a vintage car for his birthday.

Tweet: "Thank you so much to Steve and all the guys at 5 Points Academy in Nyc. Had such a great 6 weeks of training w/ (with) you." Singer Pink's husband Carey Hart has gone to great lengths to make sure his wife and newborn baby daughter are protected - he has taken a crash course in Muay Thai after enrolling in an intensive martial arts course.

Quote: "I knew when I met him he'd be a great father, but watching him fall in love, watching him nurture her, I've never been so in love with him in my life. He keeps thanking me for giving her to him. It's a beautiful time." Singer Pink is enjoying motherhood with husband Carey Hart and their new daughter Willow.

Tweet: "My wife Pink owns my heart. And she just gave me my best achievement of my life #WillowSageHart. Medals and flips got nothing on her." Motocross racer and new dad Carey Hart pays tribute to his pop star partner Pink after she delivered a daughter on Thursday (02Jun11).

Quote: "She's just so connected and so ready to be a mother. Our kid is going to have a great experience. He or she is going to travel the world with us... (and) I think we'll have a pretty well-rounded kid." Pink's husband Carey Hart is looking forward to the impending birth of the couple's first child.

Tweet: "Walking through a Vegas casino pregnant - I feel like a walking reminder for birth control..." Expectant mother Pink feels a little out of place in Las Vegas. The pop star and husband Carey Hart are expecting their first child this spring (11).

Quote: "I feel sorry if we have a girl because that whole analogy of the dad on the couch with the shotgun, well, I’m pretty heavily tattooed. I’m pretty intimidating looking so I feel sorry for a little girl trying to bring boys home. Between my very headstrong wife and myself, I feel sorry if we have a girl." Motocross racer Carey Hart will be a strict father if his child with pregnant wife Pink turns out to be a girl. The singer is due to give birth this spring (11).

Quote: "(He) is so excited. He's wanted to be a dad since - I mean, we've been together nine years on and off, and he brought it up two weeks after we met. So, he's wonderful. He's going to be a really, really cute daddy." Pregnant pop star Pink admits her husband Carey Hart can't wait to become a first-time father.

Quote: "Carey brings me breakfast in bed... counting the days until that goes away, but it's been good... He has been so wonderful that it's making me nervous! He just does all of it. He does stuff I could even do but just don't like it. He's wonderful." Pink reveals her husband Carey Hart has been doting on her during her pregnancy.

Quote: "I feel so old. I'm not 17 anymore. I would love to corrupt babies some day." Singer Pink is keen to start a family with husband Carey Hart.

Quote: "At this point, we're still trying not to (fall pregnant), but I can't wait to not try not to." Pink is almost ready to start a family with husband Carey Hart.

Quote: "When I met Carey, I was an abused puppy in the corner, ready to bite anyone who put their hand out." Pop punk Pink insists she has been tamed by her motocross star husband Carey Hart.

Quote: "I set my bedroom on fire once. Carey wanted to have a quickie (sex), and I left a cigarette burning on an oven mitt... When Carey says, 'Quickie,' I get excited." Pink really knows how to fire up sex sessions with her husband Carey Hart.

Quote: "He cheats at Scrabble. He gets mad because he doesn't know as many words as me. We can't play anything that requires a winner." Game night for pop star Pink and her husband Carey Hart can become a fight night.

Fact: Pink and her husband Carey Hart scored the best arrival at the MTV Video Music Awards on Sunday night (13Sep09) when they showed up on the back of a fire engine.

Quote: "The thing about Pink is she's so dedicated to her fans and putting on amazing live shows. She might not see the record success of a Britney Spears but the girl sells a hell of a lot of albums. She's incredible." Motocross star Carey Hart admires his wife's dedication to her work. The couple split last year (08) but has since reunited.

Quote: "We're rebuilding. Sometimes you have to take a couple of steps backwards to move forward. We're definitely putting in work." Carey Hart on reviving his relationship with wife Pink.

Quote: "I really loved my husband's penis. It was really pretty." Pink on what she misses most about motocross star Carey Hart, whom she split from earlier this year (08).

Quote: "I skidded off the track and nearly took a guy out that I had passed two turns earlier... About a half a lap later I got a flat tyre." US motocross star Carey Hart on how he reacted when he noticed then-girlfriend Pink was holding a 'Will you marry me?' sign at a race meeting last June (05).

Quote: "I told him, 'I don't believe in marriage, don't ever ask me. If you ask me I'll walk out the door...' and then I asked him, because I knew he'd never ask... I like him a lot. I'm very fond of him." Pink on why she proposed to motocross star Carey Hart.

Quote: " I think the only difference is you have to fight nicer, because you're committed." STUPID GIRLS singer Pink on what has changed since she married motocross champion Carey Hart.

Quote: "It was two minutes before the race and it was a beautiful weekend and I had a vodka and Red Bull. It gets you amped!" Singer Pink on preparing to propose to moto cross champ Carey Hart while he was participating in a race.

Quote: "We take a bottle of champagne and go down to the Virgin Megastore (in New York), me and my husband and usually my best friend LAURA. We go down and we toast and we buy a record." Pink on how she and husband Carey Hart celebrate her album releases.

Fact: <p>Pink wrote and recorded a special song, called LOVE SONG, for her new husband Carey Hart, which was played while the couple cut their wedding cake at their Costa Rica nuptials on Saturday (07JAN06). </p>

Fact: <p>Racing champion Carey Hart is having the name of his new bride Pink tattooed on his wedding finger for the ultimate lasting romantic gesture. </p>

Quote: <p>"We wanted it very fun and non-traditional. It was about being with our closest friends and family and having a very fun and loose party." Motocross champion Carey Hart on his beach wedding to Pink in Costa Rica on Saturday (07JAN06). </p>

Fact: <p>Pop star Pink walked barefoot down the beach aisle to the tune of Billy Joel's SHE'S ALWAYS A WOMAN when she wed motocross champion Carey Hart in Costa Rica on Saturday (07JAN06). Lisa Marie Presley was among the guests. </p> 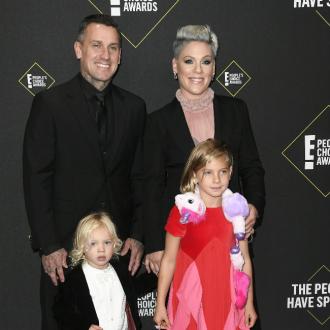