Supermodels Kate Moss And Cara Delevingne Loathe Fans Asking For 'Selfie' Photographs When They Are Using A Bathroom. 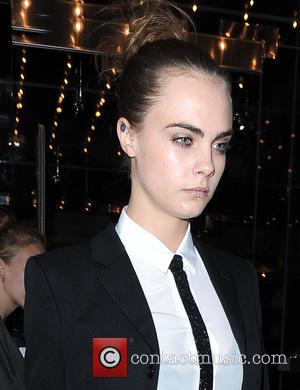 The British beauties are plagued by requests from admirers for photos and autographs when they are out in public, and they are happy to oblige for their legions of fans.

However, one place they are adamant is off-limits for an impromptu snapping session is restrooms in bars and restaurants, but they are frequently pestered by their fellow bathroom-users anyway.

In a joint interview for The Sunday Times Style magazine, Cara and Kate discuss the nature of modern-day fame and are asked if they ever get tired of fans asking them to pose for pictures.

Cara replies, "I think when you're eating or when you're in a bathroom. I've had it when I've been in a toilet cubicle and someone's gone, 'Can I get a picture?' I'm wiping my bum!"

Kate agrees, "Oh yes, me too. They follow you into the toilets, because then they know they've got you. They don't do it in the restaurant. They do it in the toilet. Like I'm going to do a selfie in a toilet... No, I don't think so."