British Model And Actress Cara Delevingne Has Lashed Out At A Paparazzo She Caught Trying To Take A Photo Up Her Skirt. 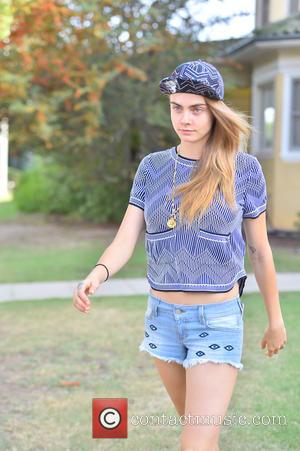 The 23 year old took to Twitter on Thursday (17Dec15) to warn fans about a "disgusting" photo she feared was about to hit the Internet, explaining she caught a paparazzo trying to steal an illicit image as she left London venue Scala on Wednesday night (16Dec15) with her girlfriend Annie Clark.

"If a picture tomorrow soon comes out of my a**... I sincerely apologise!" she fumed. "Some disgusting so-called 'human' with a camera tried to take a picture up my skirt."

And it appears she's plotting to get her revenge on the snappers who often make her public life a living hell, asking fans for their ideas on how to get her own back, tweeting, "Any suggestions? Eggs?"

Delevingne, who was leaving a Project-Zero Wave Makers charity event when the naughty shot was taken, has made it clear she's not a fan of the paparazzi, previously blasting them for making her feel like "a zoo animal".

"If only I could make you feel the way you make me feel. I just hope that outside of this, you are able to feel empathy for others," she said.

"One day when I have time, I will find out where you live and camp outside your house with my friends armed with cameras. I refuse to let these grown men treat people like objects with no feelings and get away with it, I will never be silent."