British Model-turned-actress Cara Delevingne Has Been Tipped As A Hot New Hollywood Talent After She Was Named A Rising Star At The Cinemacon Big Screen Achievement Awards On Thursday (23apr15). 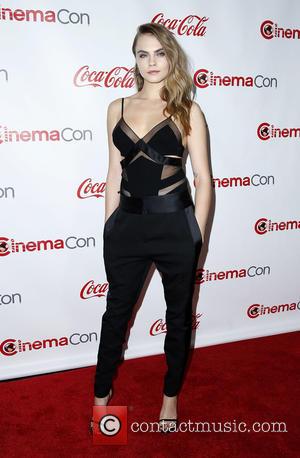 Picture: Cara Delevingne - A host of stars were snapped as they attended the 2015 CinemaCon Big Screen Achievement Awards which were held at Caesars Palace...

The British model was presented with the prize, which she shared with Nat Wolff, her co-star in upcoming movie Paper Towns, during the ceremony at the Caesar's Palace resort in Las Vegas.

After the event, Delevingne wrote in a post on Instagram.com, "Thank you to everyone who was involved in making (Paper Towns) and especially to my co star (Wolff) you made the whole experience a dream come true. Cannot believe we one (sic) the Rising Star Award at CinemaCon! AHHHH (sic)."

Elizabeth Banks was handed the Breakthrough Filmmaker award for her upcoming directorial feature debut Pitch Perfect 2. Her Hunger Games director Francis Lawrence picked up a filmmaker award and the cast of the new Fantastic Four movie, including Kate Mara and Miles Teller, won the Ensemble Award.