Cara Delevingne has been making music with her girlfriend, singer St. Vincent. 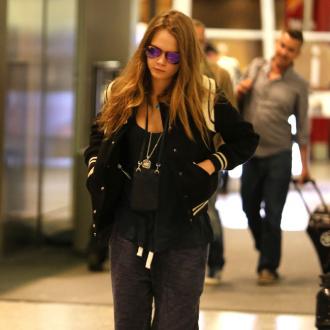 Cara Delevingne has been making music with her girlfriend.

The model-turned-actress - who is dating St. Vincent, aka Annie Clark - is keen to establish her acting career before officially branching out into music, but has been working hard in the recording studio behind the scenes.

A source said: ''Cara's recorded music with Pharrell Williams and she's working and writing with her girlfriend Annie.

''Once Cara finds success in her acting career, she'll be ready to share her songs with the world.''

The 22-year-old beauty recently spoke publicly about her relationship for the first time, and friends say she wants everyone to know what a ''positive'' effect Annie has on her.

The source said: ''Cara has been with guys and girls and could have chosen to hide this side of herself.

''But she can't live a lie, especially when Annie has made her so happy.

''Cara wants the world to know about her relationship and the positive effect it's having on her life.''

And friends think her decision to take a step back from modelling can only be a good thing.

The source told LOOK magazine: ''The lifestyle of excess that came with modelling was dangerous for Cara. Even Kate Moss told her to take some time off or she'd lose the plot.

''She actually got sidetracked into modelling. Cara was acting before she became a model so she's just reverting back to what she really wants to do.''