Cara Delevingne driven out of Cannes party by Michelle Rodriguez

Cara Delevingne and her girlfriend St Vincent swiftly left a Cannes party, when they heard the supermodel's ex Michelle Rodriguez was also in attendance. 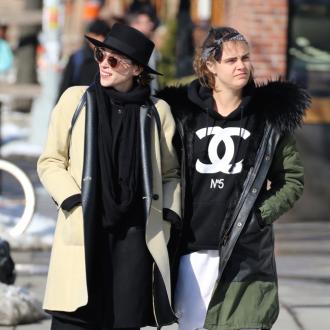 Cara Delevingne was driven out of a Cannes party by ex-girlfriend Michelle Rodriguez last night (20.05.15).

The 22-year-old supermodel was at the De Grisogono bash at the Hotel du Cap with her new girlfriend, St Vincent, 32, but as soon as Cara heard her 'Fast and Furious' star ex - who she broke up with after six months together in June 2014 - had arrived, she made a swift exit, telling friends, ''I can't face seeing her''.

Sources said: ''Cara and Michelle haven't spoken since the split and they aren't friends anymore. Cara was with her new girlfriend and she couldn't face any kind of awkward confrontation.

''As soon as they heard Michelle had arrived they left. Cara was telling her pals she just didn't want the hassle. She left the bash at about 1am and headed back to her hotel. Very tame behaviour.''

Leonardo Dicaprio was also at the party, surrounded by ladies for most of the night.

The 40-year-old 'Wolf of Wall Street' actor left the Hotel du Cap at 5am to have his own celebrations at his villa.

A source told The Sun newspaper: ''Leo knows how to party.

''He invited everyone back to his villa, which he is sharing with the British producer Nellee Hooper.

''It really was a no-expense-spared, boozy affair.''