Cara Delevingne and Jourdan Dunn have cemented their close friendship by getting matching tattoos of their surname's initials. 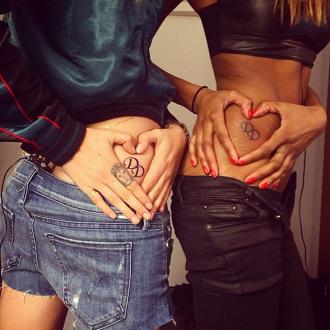 Cara Delevingne and Jourdan Dunn have got matching tattoos.

The model pals decided to celebrate wrapping up their latest campaign shoot for DKNY in New York City by heading to the Bang Bang Tattoos parlour, which is owned by celebrity tattooist Keith McCurdy, to invest in some matching body art.

The pair then took to their Instagram accounts to show off their latest inkings, which feature the letters D and D entwined together on their hips, presumably referring to their surnames Delevingne and Dunn.

Meanwhile, earlier in the same day, Cara posted another image of herself holding a cardboard sign with the hash-tag ''#carawantsyou'' written on it, as she presented fans with the opportunity to appear alongside her in an upcoming modelling shoot for DKNY.

The caption reads: ''Guys! So, I created a sick special-edition collection with @donnakarandkny coming later this year, and I WANT YOU to be in the campaign with me!

''I'm CASTING for a few lucky fans to come to New York City and model my new #DKNY collection in a special photo shoot with me.''