Review of Not Kings Album by Candy Says

It's been an unusual transition for  Juju, previously of Island Records' Little Fish, going from major label success to the very DIY ethic of Candy Says and it's hard not to have a deep respect for that. Recording in a garage with only the most basic of studio equipment, Candy Says impressed us with their 2013 single releases 'Melt Into The Sun' and 'Favourite Flavour' and now they're here with their full-length debut album 'Not Kings'.

The title track opens this pretty unique collection of songs with a strong and deliberate rhythm and a thrillingly optimistic pop vibe. It sets the album up well for what to expect; well-structured electronic compositions and infectiously repetitive lines all the way through: 'Gotta get out before my heart explodes'.

There's plenty more of that in the first half of the record; 'Favourite Flavour' is another uplifting number, even more catchy but with dreamier vocals. It's arguably the most memorable track on the entire album - though that doesn't make it the best. If we're talking best song, then 'Lord's Mistake' is a strong contender with its funky guitar riffs and Juju's vocals entering rock terrain. There's a few curveballs in there too like 'Hummingbird' which has a 60s lounge music feel about it and the partly spoken word 'Dreamers' which sees the synths at their heaviest.

The album slows down a lot for the second half and is often a lot more downbeat. 'Dead On Arrival' is the best example of this; the haunting lyrics, the synths almost used as sound effects and the gentle guitar just work together seamlessly. 'C'est Pas Comme Ca' is definitely the best of all the minimalist and melancholy tunes on the tracklist, though it comes weirdly towards the start of the album. It's also has one of the best melodies of the lot, which is saying something as memorable tunes seem to be what Candy Says is all about.

Slow doesn't always mean sad though, and 'Chad' is certainly one of the most pleasant listens on the record. Written for the drummer of the same name from LA band Dark Furs, Candy Says utilise organ and brass effects to induce smiles all round. The album ends on a vocally strong note with 'Camilla'. It feels a little more upbeat (musically, not lyrically) and the powerful harmonies round it off with a satisfyingly 'finished' sound. The lyrics aren't exactly bursting with originality, though; 'You only ever call me up, Camilla, when you feel alone' joins the ever expanding number of 'You only call me when...' songs in the world.

It's difficult to know if it's a good idea that the album was split up into faster songs and then slower songs - it does keep the appropriate vibes going, but for some pop lovers the latter half could be mistaken for being boring. Nonetheless, Candy Says have fearlessly put themselves out there as self-producers and, for a debut album, 'Not Kings' is excellent. It's a real showcase of what Candy Says are capable off with varied instrumentation and unbelievably memorable melodies. We can hardly wait for what they come up with next. 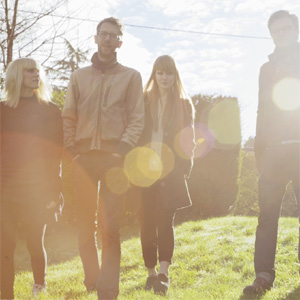