Supermodel Candice Swanepoel Is Fighting Off A Nasty Bout Of The Flu Days Before She's Scheduled To Hit The Runway For The Annual Victoria's Secret Fashion Show Next Week (Begs09nov15). 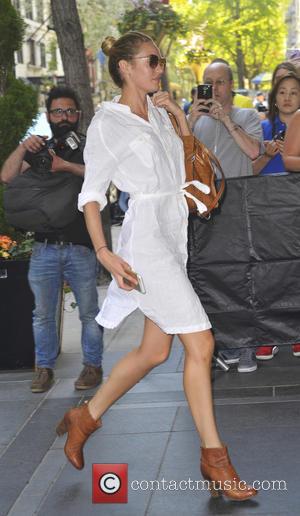 Picture: Candice Swanepoel - Celebrities arrive at their hotel prior for 'China: Through The Looking Glass' Costume Institute Benefit Gala at the Metropolitan Museum of Art...

The South African stunner is slated to return to the annual lingerie show for the ninth year in a row on Tuesday (10Nov15), but an illness might get in the way of her walk down the runway.

"Possibly the worst time ever to get flu," Candice wrote on Instagram, along with a photo of herself wearing an oxygen mask, adding, "great time for a selfie."

If her condition improves, the Victoria's Secret angel will walk the catwalk alongside fellow veterans Adriana Lima, Alessandra Ambrosio and Behati Prinsloo, as well as newcomers Kendall Jenner and Gigi Hadid.

This year's (15) Victoria's Secret Fashion Show in New York City will celebrate the 20th anniversary of the event, and feature performances from Ellie Goulding, The Weeknd and Selena Gomez.

Candice Swanepoel: My beauty products are from my fridge

Candice Swanepoel has got engaged

No acting plans for Candice Swanepoel