Cameron Diaz Signs Up For The Counselor

Cameron Diaz has signed up to a role in 'The Counselor', replacing Angelina Jolie. 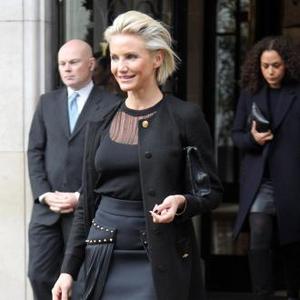 Cameron Diaz has signed up to a role in 'The Counselor'.

Although Angelina Jolie was reportedly interested in the part of Malkina, ''a hyper-sexualized Argentinean woman'', director Ridley Scott has given the part to Cameron after Angelina struggled to fit it in around her 'Maleficent' shooting schedule.

'Shame' actor Michael Fassbender is already confirmed to star in the film, which has been penned by Cormac McCarthy - the award-winning author who wrote 'The Road' and 'No Country for Old Men' - and follows a lawyer who decides to get ''a little bit'' involved in the drug business, only to discover there is no way to just do that.

Cameron's character is a love interest of drug dealer Reiner (Javier Bardem) who partners with Fassbender's character to sell $20 million worth of cocaine.

Production on 'The Counselor' is scheduled to begin in June.

The contemporary movie is the first film script from writer Cormac with producer Nick Wechsler previously saying: ''The spec falls smack in the middle of what everyone responds to with Cormac's novels.''

Co-producer Steve Schwartz added: ''Since McCarthy himself wrote The Script, we get his own muscular prose directly, with its sexual obsessions. It's a masculine world into which, unusually, two women intrude to play leading roles. McCarthy's wit and humor in the dialogue make the nightmare even scarier. This may be one of McCarthy's most disturbing and powerful works.''