Cameron Diaz formed a close bond with Kate Upton on the set of their upcoming movie 'The Other Woman' and pretended to be her mother on the set. 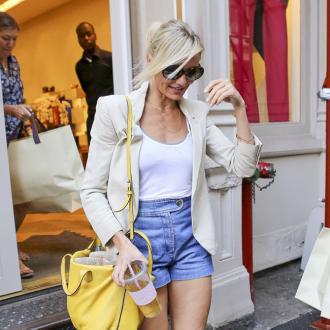 Cameron Diaz pretended to be Kate Upton's mother while filming 'The Other Woman.'

The 41-year-old actress and her co-star Leslie Mann formed a very close bond with the Sports Illustrated model, who is beginning to carve out a career in Hollywood, while shooting the upcoming movie in New York City last year and she thinks the 21-year-old beauty is ''fantastic.''

The 'What to Expect When You're Expecting' star told E! News: ''To work with Leslie Mann and Kate Upton, who are just two of the greatest shining bright beauties. Leslie Mann blows my mind, she is so fearless, and we didn't know Kate beforehand, but she literally just slipped right in [under our wings].

''We kept saying, 'We're your parents. We're your moms, one day we'll tell you who your dad is. We'll let you know who the donor was.' She's fantastic. And Leslie, Kate and I had a great time.''

Health conscious Cameron recently released her first publication, 'The Body Book,' and was inspired by her best friends Gwyneth Paltrow and Drew Barrymore, who have both also released books, to write about something she was passionate about.

She said: ''It took me a year to write this book and I really put my energy into it, my focus into it, it really mattered to me that it was authentic to who I am.''