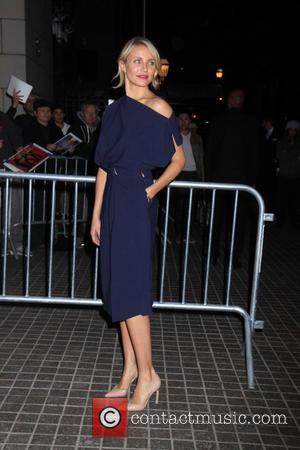 Actresses Cameron Diaz and Leslie Mann ganged up on their The Other Woman co-star Kate Upton during a recent flight and drew a moustache and beard on her face as she slept.

The trio has been travelling across the world promoting the new romantic comedy, and Diaz and Mann decided to have a little fun at the model-turned-actress' expense after Upton fell asleep on a plane.

Mann explains, "She was fast asleep, like right away (after take off), which makes me so mad because I never sleep on flights, so Cameron and I are up and we're like, 'What are we gonna do?' And we decided to draw on her face.

But the Charlie's Angels star sympathised with the 21 year old and insisted on drawing fake moustaches and beards on her and Mann's faces too, so they could take pictures of the stunt.

However, Diaz started to feel so bad, she ended up wiping all of the pen ink off Upton's face before woke up: "I felt so guilty, I was like, 'We can't do that to her, that's so mean!'"