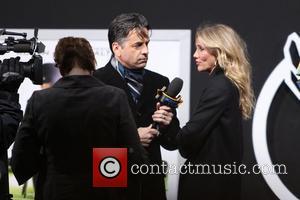 Cameron Diaz, the 38-year-old American actress, says she would love to star in a third CHARLIE'S ANGELS movie but insists she doesn't know whether there are any plans to make one, reports E! Online. The actress starred alongside Drew Barrymore and Lucy Liu in the 2000 film as well as in the 2003 sequel 'Charlie's Angels: Full Throttle'.
Diaz, who appears in the forthcoming superhero film 'The Green Hornet', says she would consider making a third movie in the franchise but admits that "a new crop of girls" might take the reins if the project gets the go-ahead. When asked about the possibility of reuniting with Barrymore and Lui for the film, Diaz said, "I would love to... Of course I would. Why wouldn't I? It'd be fun!" but added, "I don't know if we'll do it. I mean, we played the movie as the new crop of Charlie's Angels and we never were trying to be or pretend we were the other girls. So it might just be time for a new crop of girls to come on".
The original movie, directed by acclaimed filmmaker McG, grossed over $264 million at the box-office, and the sequel featured cameos from the likes of Bruce Willis, Carrie Fisher, and John Cleese.