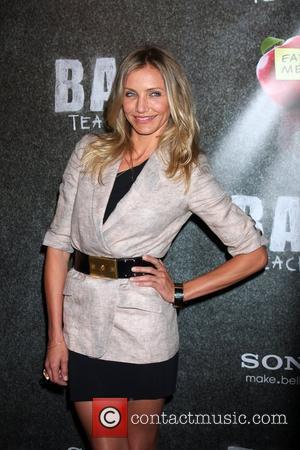 Cameron Diaz and Drew Barrymore's friendship began when the former model used to frequent the Beverly Hills coffee shop where the E.T. star worked.
The Mask star Diaz insists the two actress' paths first crossed when they were teenagers.
She tells Access Hollywood, "We've known each other so long. We met when she was 14 and I was 16. We met at a place that we both used to hang out in... when I was modelling and she wasn't acting.
"She was working at this coffee shop or this soda shop, and I used to go hang out there and we became friendly.
"Once I started acting, she (said), 'Oh, I remember you!' and we used to hang out and we became friends."
But after Barrymore asked Diaz to to "do Charlie's Angels", the two women became "like sisters".
Barrymore presented her pal with the Female Star of the Year award at the inaugural CinemaCon Awards in Las Vegas on Wednesday (30Mar11).
Diaz revealed, "(The fact) that she would come is really special for me."