Cameron Diaz: Making Annie For The Next Generation Was Awesome

The musical-comedy adaptation of Annie, produced by Will Smith and Jay Z, is out in cinemas now

Annie is out in cinemas and ready to entertain you this holiday season with the latest adaptation of the cherished musical produced by Jay Z and Will Smith. Little orphan Annie is played by 11-year-old Quvenzhane Wallis with the role of Miss Hannigan taken on by Cameron Diaz and Jamie Foxx plays Will Stacks based on the original character, Oliver Warbucks. 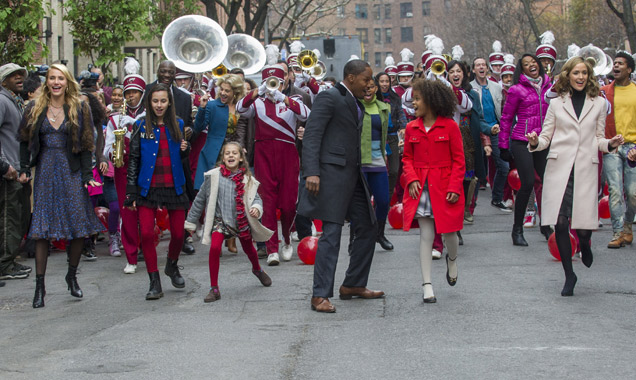 But were these two big Hollywood stalwarts fans of Annie before they took on these iconic roles?

Speaking about the film, it seems Diaz and Foxx were definitely in the Annie camp.

MORE: Annie Is Targeted In The Sony Hack

Diaz said: "I grew up with Annie. The songs were something everybody knew. Even if you didn’t see the movie, you knew the songs. Getting to do Annie was such a great opportunity - one because you get to sing and dance which is something you never get to do and two to make a movie that is for a new generation. To say, here you go, here’s your Annie. That’s really awesome."

When asked what they enjoyed filming most, Foxx was very complimentary about his first scene with Diaz.

MORE: Annie Remake Tries To Put A Spin On The Classic

He said: "Our first scene together was a window into what we had to do in the future. Our energy was so great, it was crazy and everybody on set was laughing."

This is the third on screen adaptation of Annie and the cast and producers are hoping that the "Sun Will Come Out" for this modern take on the classic musical.

If you can't get to the cinema right now, take a sneak preview of the trailer below.