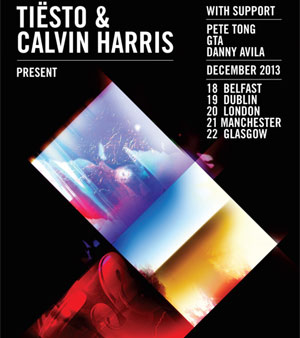 Last week, superstar DJs/Producers Calvin Harris and Tiesto announced teaming up for an amazing five city tour of the UK and Ireland. Their 'Greater Than' tour has proved to be one the hottest tickets this December - it kicks off at The Belfast Odyssey on 18th December and culminates at Glasgow's Hydro Arena on 23rd of December.

SOLD OUT completely the morning of general release. A second Glasgow date was then added, selling out within minutes and with the Manchester date also selling out, due to exceptional demand, a final release of extra tickets has been made available and are on sale now.

The full-tour line-up has now been announced. Calvin and Tiesto will be joined on tour by British master Pete Tong, GTA - the Miami-based and genre-defying duo already used to stadium arenas following their tour with Rihanna and also Danny Avila, one of the hottest up and coming talents, voted best newcomer in 2011 at the Vicious Music Awards.

Calvin Harris and Tiesto are two of the biggest DJs in the world. After collaborating on the song 'Century' together in 2009, these UK and Ireland dates will be the first time they have toured together and follow their joint 20-month residency at Las Vegas' new Hakkasan nightclub, where they currently alternate DJ sets each weekend.