John Newman joined Calvin Harris on stage at The Roundhouse in London on Sunday night (07.09.14) at the iTunes Festival to perform their new single 'Blame', which the pair created after exchanging messages on Twitter. 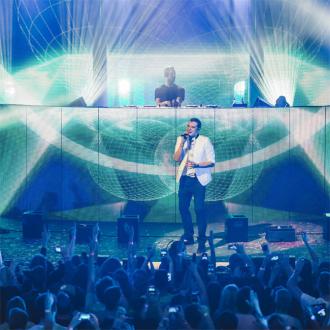 Calvin Harris was joined on stage by John Newman at the DJ's iTunes Festival show on Sunday night (07.09.14).

The 30-year-old super-producer introduced the singer on stage for a rendition of their new single 'Blame' and the crowd went wild as John stepped out in a white suit jacket and black trousers for the track and showed off his dance moves.

Calvin arrived behind his decks after a clock counted down from 20 to one and after declaring ''My name is Calvin Harris'' he opened his set with 'Under Control'.

The DJ played a hit-filled show with highlights being 'I Need Your Love' - his track with Ellie Goulding - 'Bounce', The Source's 'You Got The Love' and 'We Found Love', his smash hit with Rihanna.

He closed his show with his latest hit 'Summer' as the entire venue bounced to his beats.

Meanwhile, Calvin has revealed his collaboration with John came about after the soul singer contacted him via Twitter asking him to listen to a song he'd written.

Speaking in a joint interview on BBC Radio 1, Calvin said: ''We were following each other on Twitter and John slid up in my DMs (direct messages) and he went, 'Hey I've got a track, do you want to work on it?' And it was good!''