Quite often, when you listen to an artist's recorded output, you can sense what they were going through at the time of writing it. You can feel their pain, their sorrow, their joy, the anticipation of lust. It's this shared experience that makes listening to music such a cathartic, enriching experience. And so it is, listening to Calvin Harris' third album '18 Months,' that you can almost feel the heavy tread of the sole of the record company's boot in the back of Harris' back. As you dive into round #34 of certified dance-floor-filler clipped drum beats and bolstered synths, you, too, may feel the pressure on your shoulders starting to weigh down. That, we can presume, was the very same pressure that Harris must have felt after 'We Found Love' went stellar last year. 'More of that, please Calvin,' they must have asked. So we have more of it. A lot more of it. 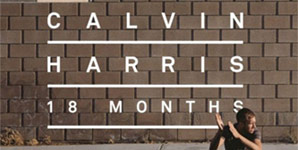 We got a lot more in the way of guest vocalists, as Harris stepped back from the microphone and let the really famous people do the talking. At times, it's inspired. Kelis' turn on 'Bounce' is sparky, buoyed by 8-bit style beats and infused with joyousness. At other times, however, it seems that Harris is masking the lack of dimension in his production by asking a reliable stream of singers to bring their own brand of variety to the table for him. Both Ellie Goulding and Florence Welch provide some of the more interesting additions to the album. Still, it's a disappointment when the tracks on which they appear remain carelessly placed in the canon of formulaic electro-pop that Harris has come to rely on so heavily. In both cases, he appears to be exploring some nuances of his own ability, but seems to freak out at his own sense of exploration and before long, the tracks are whomping and whooping along just like all the others.

'I Need Your Love' starts with a degree of subtlety (well, 'subtle' in Calvin Harris terms, which isn't really subtle at all and involves a pretty dramatic piano-led introduction); the perfect complement to Ellie Goulding's 'don't touch me I might snap' vocals. The relieving switch in tempo lasts less than 30 seconds before the oppressive onslaught of synthetic drums kicks in. Listening to the fifteen tracks contained herein - some of which, listeners will be familiar with, such as the Rihanna vehicle ',' which was first released last year - there's a sense that Calvin Harris only has one gear and there's a sense that he's locked into it, no matter how hard he tries to break away.

Someone else that only has one gear but knows how to use it well, is Dizzee Rascal. His guest appearance on 'Here 2 China' is one of the highlights of '18 Months.' Whilst Calvin coasts in third gear, breezing through easy clubland territory, Dizzee only knows fifth gear. As such, he forces Harris to step up and write something to match something that can match up to his fiery flow. As such, you get bass in place of shrill mid-levels and wit, in place of lyrical shlock.

Right now, that Calvin Harris tempo seems to be working for him. There's little reason for him to break away from the template when its bringing him chart high after chart high. Listening to party anthem 'Drinking From The Bottle' with Tinie Tempah, it's a raucous celebration of the kind of lifestyle that only a margin of his listeners can relate to (swigging from a bottle of Veuve Cliquot? Nice work if you can get it.) and you can pretty much smell the blue WKD spilling down the Hollister v-necks and onto the already-sticky floors of town centre nightclubs up and down the country. It's a sure-fire fast-track into the CD-Js, so you can hardly blame him for sticking to the formula, all the while it's getting lapped up.

And of course it's easy to be cynical about pop music such as this; it's an easy target. But this isn't a matter of taste; Calvin Harris is good at what he does. He's not the most skilled producer out there but he knows how to distill adrenalin into a dance tune, he knows how to appease the un-discerning masses. That's a skill in itself. How long can he keep this up for though? There are glimpses of adventure in '18 Months.' A taste of old-school funk, in 'School' that comes and goes all too briefly, for example. He can't surely maintain this tempo for another album and frankly, listening to 15 tracks of '18 months' requires a degree of stamina from the listener that will tire all but the most adolescent of fans. The most interesting thing about listening to '18 Months,' sadly, is trying to figure out what the hell he's going to do next.