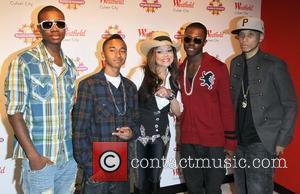 Cali Swag District star M-Bone, who was murdered in Los Angeles on Sunday (15th May 2011), could have been killed by a "jealous man" who threatened the rapper over Twitter. A woman claiming to be M-Bone's girlfriend says the Cali Swag District star could have been gunned down by a man who was envious of his success, reports Tmz.com.
M-Bone's girlfriend says a man living in their apartment complex was "obsessed" with the success story of Cali Swag and became "overtly hostile" to the rapper. She confirms that M-Bone was in a "Twitter war" with the jealous man. The woman says she picked the rapper up from the airport at around 12.15pm on Sunday and took him back to their apartment. Later that night, M-Bone used her car and said he was going to the studio to do some recording. After stopping at a liquor store in Inglewood, the rapper was shot and killed by a mystery assailant who fled the scene immediately. Police are currently investigating the shooting but have so far made no arrests. In a statement released on Monday, a representative for the rap group said that M-Bone "was the victim of a random act of violence".
Cali Swag District rose to fame in 2010 with their platinum selling single 'Teach Me How to Dougie', an ode to the dance popularized by the 1980's rapper Doug E. FRESH.