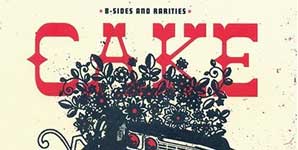 A combination of covers, Cake classics and live versions makes B-Sides and Rarities an indisputably fun album to listen to. Infact the only real shortfall was the fragrance of this scratch and sniff edition.

The album kicks off with a cover of Sabbath's 'War Pigs', a song most everybody knows and so almost acts as a warning that we are not going to hear anything new here, but instead will be treated to a combination of well known classics. Gladly this first track feels more like a tribute than a 'cash in' cover effort.

Followed with another cover track 'Ruby, Don't Take Your Love to Town' written by Mel Tillis, the listener is given an insight to the truly eclectic nature of this album whose inspiration bounces from metal to country and runs through everything in between.

Never letting things get dull, Muppet fans across the world will be happy with Cake's rendition of 'Mahna Mahna', but failing that 'Conroy' combines futuristic tones with a psychedelic far eastern feel.

Pulling back into a smooth classic with 'Strangers in the Night', a cover that doesn't feel like one at all, Cake successfully put their own stamp on this Sinatra favourite whilst remaining true to the original soul of the song, a rarity indeed. This continues with 'Never Never Gonna Give You Up', distinctly Barry White, but now with a uniquely Cake twist.

This album is laced with live versions and it's not often that I can truly appreciate them, but 'Short Skirt, Long Jacket' falls under the category of those I can as it sacrifices none of its quality. 'It's Coming Down' follows and is remarkably crisp, without prior knowledge I would have never known it was live, a true testament to the band's talent.

If you've never really known much of Cake then this is a great place to start, I usually prefer compilations of lots of different artists, but B-Sides and Rarities fulfils this criteria with its diverse range of miscellaneous musings. A very entertaining album with something for everyone, it certainly won't be left to collect dust, although I'll have to do something about the smell!!