Leah Jenner has announced she gave birth to a healthy baby girl last week, with her and husband Brandon Jenner deciding to name the tot Eva James Jenner. 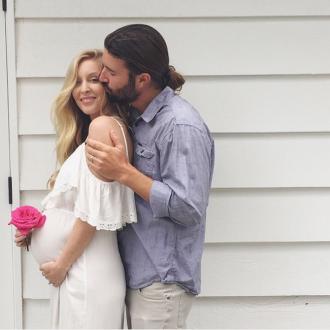 Leah Jenner has given birth to a baby girl.

Leah - who wed Caitlyn Jenner's son Brandon Jenner in 2012 - has revealed she gave birth to the tot last Wednesday (22.07.15) and they have named her Eva James Jenner.

She wrote on Instagram: ''On Wednesday, July 22nd I became a Mom.

''Brandon and I are taking care of our healthy, little baby girl, Eva James Jenner (sic).''

In the message, the Brandon & Leah musician explained becoming a mother has been a ''profoundly beautiful'' experience even though she has found her new role ''challenging''.

She explained: ''It has without a doubt been the most profoundly beautiful time in my life but also emotionally, spiritually and physically challenging too....and I am so grateful for every second of it. (sic)''

The 32-year-old star announced her pregnancy in March and confirmed the couple were expecting a girl last month, but she also shared her honest feelings about how tough she was finding pregnancy, joking she felt like overweight 'Star Wars' character Jabba the Hutt.

Gushing about her beau, she quipped: ''I feel like Jabba the Hutt...but I have this hot man nurse soooo.... #countdowntodelivery (sic).''

Despite not being a fan of her pregnant figure, the star previously said she felt ''honoured'' to be becoming a mother.

She said: ''I feel honoured to have this little life growing inside me, and I'm amazed by the power of the female body.