Butcher The Bar's new single, 'Alpha Street West', is taken from his second studio album, 'For Each A Future Tethered', which was released in June 2011. His debut album, 'Sleep At Your Own Speed', was released in 2008 to positive reviews from critics.

The video for Alpha Street West sees Joel - aka the man behind Butcher The Bar - against blue wallpaper. In a gravity defying video, we see all manner of objects - including feathers and balls - thrown at Joel, as well as water and white paint. Yet the whole thing is done almost calmly, which suits the mood of the song.

Butcher The Bar is the brainchild of 22 year old Joel Nicholson, who hails from Rotherham, in the north of England. Already drawing comparisons to Elliot Smith, his debut album was praised for the personal nature of the lyrics. He has since moved to Manchester, where he recorded his sophomore release. That, too, was released to a positive reception, with critics commenting on the more upbeat lyrics.

The video for Alpha Street West was directed by Rob Jury.

Butcher The Bar will be touring with Death Cab For Cutie in November. The dates are as follows:
16.11 London, Hammersmith Apollo
17.11 Leeds, Academy
18.11 Birmingham, Birmingham Ballroom
19.11 Glasgow, Ucademy 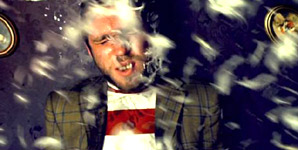