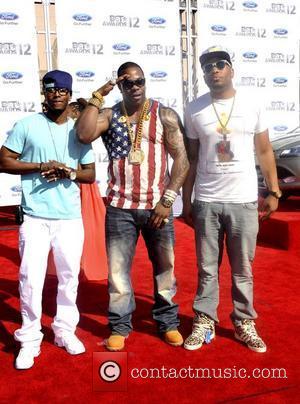 Police were called to a Miami, Florida burger restaurant in the early hours of Wednesday (03Apr13) when rapper Busta Rhymes allegedly caused a disturbance after he was refused permission to skip the line.

The Touch It hitmaker, real name Trevor Smith, is accused of storming into the Cheeseburger Baby (Cbb) store with his entourage and insisting that he should receive immediate service.

Owner Stephanie Vitori tells the Miami New Times, "He got very upset when we wouldn't take his order first when he was the last one to come in. We treat everyone as equals here at Cbb. You can't skip the line of 10 people waiting in front of you."

Rhymes reportedly headed back to his car to wait as a friend placed his order, but he is said to have returned to the restaurant after receiving his food and complained about his order, allegedly launching into a foul-mouthed tirade aimed at store employees.

Vitori says, "He came back in the restaurant and started becoming outwardly angry. He was calling our delivery driver Santiago a f** multiple times, and me a b**ch and (telling) me to 'shut the f**k up' because we put his salt, pepper, ketchup, and mayo - that he asked for - on the side...

"He caused such a scene I was forced to call the cops on him. This is when he exited the restaurant... I deal with drunk and disorderly people all the time. I have been doing this for 11 years, but never in my life have I felt more disrespected as a business owner or woman."

The hip-hop star, 40, had left the scene by the time Miami Beach cops arrived, but Vitori filed a police report over the incident.

Rhymes, who has been filming a music video in the city, has yet to comment on the allegations.