Tom Hanks Is Convinced His Pal Ron Howard's Actress Daughter Bryce Dallas Howard Has A "Beautiful" Singing Voice After The Director Showed Off A Video She Recently Recorded Online - Without Realising It Had Been Dubbed. 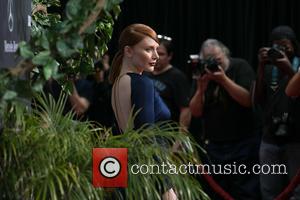 The Twilight Saga: Eclipse star poked fun at constant comparisons between herself and her The Help co-star and fellow redhead Jessica Chastain this week (begs08Jun15) by uploading a clip of herself using the video app Dubsmash to cover a funny song two fans had posted online, called, Jessica Chastain: The Musical (Bryce Dallas Howard).

The track is written from Howard's point of view and features a female singing about the two actresses' differing film roles in a bid to help others tell the pair apart.

Howard decided to have fun with the tune by lip-syncing to one specific line of the song, and her friend Chastain shared the clip on Instagram.com.

The video begins with Howard, wearing dark sunglasses, singing along to the track, before removing the shades as she belts out the words, "I am NOT Jessica Chastain!".

Howard's parents saw the clip and loved it, but they thought the actress had come up with the tune herself and had no idea she wasn't the one really singing. Her proud father decided to boast about the funny video to his Apollo 13 star Hanks - and now he thinks the 34 year old has a great voice, too.

Bryce Dallas Howard explains, "I call my parents, they saw the video... and they said, 'It's genius. That video is genius, when did you have the time to do it? It's exactly your sense of humour.' And then my dad emails me and says, 'I showed it to Hanks and he thinks you are brilliant.'

"So then I called them and I was like, 'Allow me to explain... this is not my doing. I did do the Dubsmash (clip). You understand what dub means...' They also thought it was my voice...! And then he goes, 'Oh yeah, Hanks thought your voice was so beautiful.' And I was like, 'Well you need to tell him that it's not my voice' and he says, 'Well, I like him thinking that it's your voice!'."