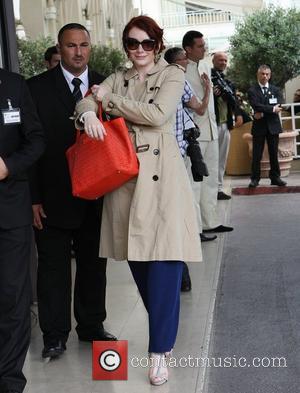 Bryce Dallas Howard, the American actress whose latest movie 'The Help' hits cinemas this summer, is expecting her second child with husband Seth Gabel, reports People Magazine. Bryce Dallas Howard already has a 4-year-old son named 'Theo' with the 'Nip/Tuck' actor.
Bryce, the daughter of filmmaker Ron Howard, married Gabel back in 2006 having dated for five years. After giving birth to her first child, the actress documented her battle with postpartum depression in Gwyneth Paltrow's newsletter 'Goop', the 30-year-old wrote, "Mostly I recall the moment someone handed my son to me, and I heard shouts of joy, and my father crying, Bryce, you're an incredible mother! And then...Nothing. I felt nothing". The actress continued, discussing how she was scared of being alone with her new-born child, saying, "Five days after our son was born, my husband had to leave for a film shoot, so my mom and best girlfriend rotated sleeping in the bed beside "Theo" and myself, whom at that point I mysteriously referred to as "it," even though we had named him". Before announcing her pregnancy this week, Howard wowed on the red-carpet at the Cannes Film Festival, wearing a flowing Reem Acra gown.
As well as 'The Help', Bryce Dallas Howard recently completed work on the forthcoming comedy-drama '50/50', with Joseph Gordon-Levitt, Seth Rogen and Anna Kendrick. The movie is a comedic account of one man's struggle to beat cancer.

Bryce Dallas Howard Cries As She Honours Her Director Father