Bryce Dallas Howard Is Determined To Keep Her Kids Away From The Glamorous Side Of Hollywood Because She Wants Them To Remain Grounded. 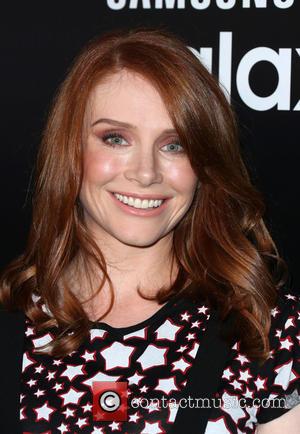 The Jurassic World star was never exposed to the glitz of Tinseltown as a child, even though her father is acclaimed filmmaker Ron Howard, and she follows his parenting rules, insisting her two kids never attend premieres or any other Hollywood function.

"What my parents did that was great was they exposed all of us to movie sets and making movies and the crew," she tells People.com. "We had a very deep understanding of the kind of work that my dad did, (but) we weren't exposed to the side of the industry that's perceived as being more glamorous, where actors are coddled and where there's a certain level of celebrity. We were completely sheltered from that. I think that that was a good call."

While Howard is keen to keep her kids humble, she has carried on a family tradition of allowing them to appear in a film on their seventh birthday. Earlier this year (15), her son Theo appeared as an extra in Jurassic World.

"I was in Parenthood and my son turned seven during this movie, so he got to be in the movie as an extra and he's in a petting zoo scene and he hugs a dinosaur," she said earlier this year. "There was a guy with kind of a sock puppet... and he hugged the arm. He was pretty good."

Bryce Dallas Howard Cries As She Honours Her Director Father