In his new movie Wakefield, Bryan Cranston plays a self-absorbed, self-pitying man who abandons his family because he's tired of his meaningless life, moving into a storage shed and living like a feral hobo. The actor relished the challenge of playing such an unlikeable character. And he admits that his ability to take on an offbeat role like this is because his success has given him a measure of freedom.

"Let me say clearly, I highly appreciate my good fortune," he laughs, then turns serious. "But there is a price. Becoming famous has changed me, and not necessarily for the better. I often now opt to stay home, when I may have had a desire to go out. I'm less social than I used to be. I have a tendency to hide away."

Cranston says that he didn't set out to become rich or famous. "I never had designs on becoming a star," he says. "I just wanted to make a living acting. That is still my most cherished professional accomplishment."

For a film like Wakefield, he says the most important thing is to identify with the character. "It's almost impossible not to," he says. "You develop an affinity for that person, and you find yourself speaking in first person. I think a lot about how 'I wouldn't do that.' You take it home, whether it's the accent or something else. You're channeling that guy. So when each actor really buys into their character and knows their character well, and comes well-prepared, then each one has a specific point of view. If we don't feel comfortable, we as the characters have to talk about it."

Cranston admits that his years on Breaking Bad honed his skills as an actor, and also that his job was to find the point in a character that the audience could connect with, playing a family man who becomes a heartless drug lord. "It taught me that everyone has the potential for evil," he says. "I could find out what scares and threatens you, push your buttons, and you might do ugly things too! But we're also all the mother whose love for her child means she can lift up cars to save them."

He has fond memories of the series but is relishing his work now too much to want to go back. "I don't miss the show," Cranston says. "I miss the people who worked on it. We were together six years, and a lot of life happens in six years. But we had a beautiful beginning, middle and end. And you have to know when to end." 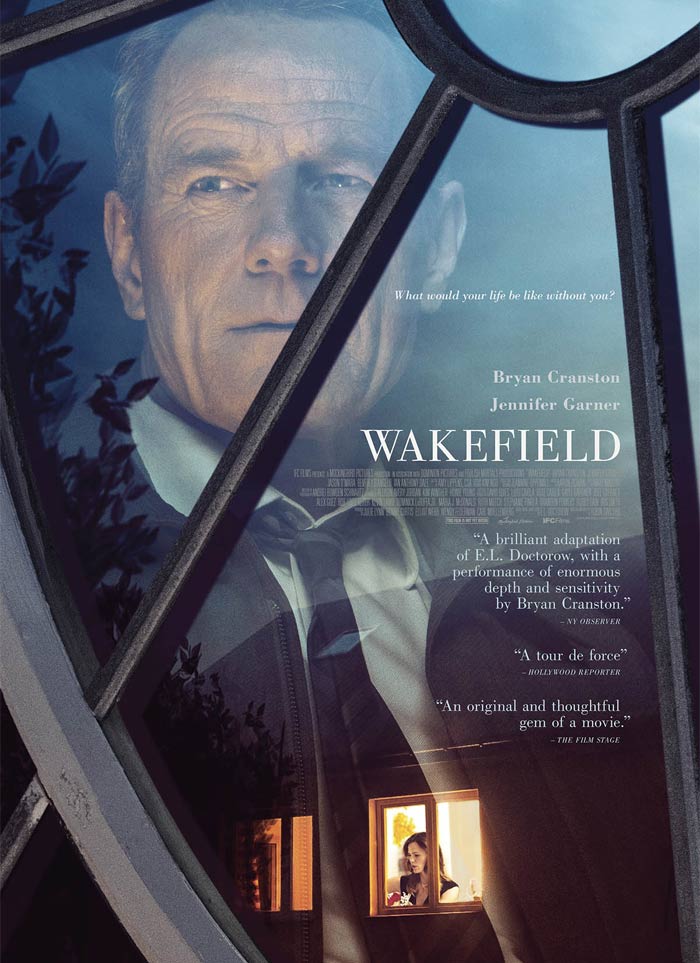 The poster for Wakefield