Bryan Cranston Malcolm In The Middle 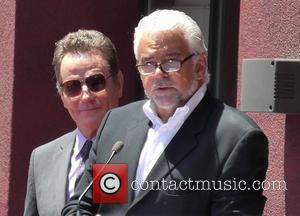 Bryan Cranston was surrounded by his Breaking Bad and Malcolm In The Middle co-stars on Tuesday (16Jul13) as he received his star on the Hollywood Walk of Fame.

The Emmy-award winning actor joined the celebrity A-list when he was presented with the 2,502nd star on the famous Los Angeles sidewalk, and his friends and family turned out to help him celebrate.

Cranston was joined by his wife Robin Dearden and daughter Taylor, as well as his Tv families from past and present.

His former onscreen wife and son from Malcom In The Middle, Jane Kaczmarek and Frankie Muniz, were both there to cheer him on, along with his Breaking Bad Tv family RJ Mitte and Anna Gunn.

The 57-year-old actor, who has also starred in The Lincoln Lawyer and Argo, also put in a performance at the ceremony, completing a number of press-ups on his plaque and singing a few lines from My Fair Lady tune On The Street Where You Live.

After the ceremony, Cranston took to Twitter to thank his friends, writing, "Today I got (a) star on the Hollywood Walk of Fame. Overwhelming. It's like walking in on a surprise party thrown just for you! My thanks to all."