The Light Between Oceans Review

With a sweeping, picturesque setting and emotive performances, this dramatic epic will appeal to moviegoers who enjoy beautiful imagery and weepy romance. On the other hand, those who get easily annoyed at melodrama will find all of this a bit thin and pushy. Still, no one will deny that it looks gorgeous, and that the cast performs with raw emotional intensity. 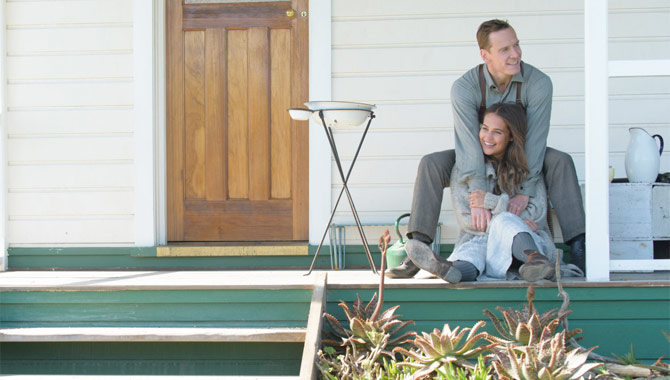 Set just after the Great War, the film follows shellshocked veteran Tom (Michael Fassbender), who has taken over the job as the lighthouse keeper and sole resident of the tiny island of Janus, where the Pacific and Atlantic meet. In the nearest town, 100 miles across the sea, he meets the beautiful Isabel (Alicia Vikander), marries her and moves her to the island with him. But their blissful happiness is shaken when she suffers two harrowing miscarriages. So it seems like fate is intervening when a boat washes ashore with a crying baby, which Tom and Isabel secretly adopt and pass off as their own daughter. Then a few years later Tom discovers the baby's real mother Hannah (Rachel Weisz) in town, and they're forced to grapple with the moral issues.

Tom, Isabel and Hannah all face increasingly difficult decisions as this story unfolds, and the events push every button carefully, removing much of the complexity from the situation. It's painfully clear what must happen, and many scenes are darkly disturbing as a result, especially as characters turn on each other, making some very selfish choices and showing unexpected compassion and understanding. Nothing that happens here is easy, and the actors invest the characters with plenty of passion, plus the complexity that's lacking in the script. Fassbender is stoic, Vikander is wrenching and Weisz trumps them both with her sympathetic yearning. There's also a terrific scene-stealing turn from the young Florence Clery as the daughter in question.

When Set brutally murderers his brother, Osiris the great deities of ancient Egypt are upset, non-more so than his wife Isis. Piecing her husband - and fellow god - Osiris back together, she manages to resurrect him for long enough to conceive Horus. So begins a lifetime of battles for the Kingdom.

Set, the brother of Osiris and god of storms, disorder and violence on one side and Horus, the son of Osiris on the other. When Set and Horus go head to head in combat, the mortal citizens of Egypt hope for one victor (Horus) but in a moment of weakness, Set makes his move and steals the eyes of Horus.

Soon after the downfall of Horus, Set takes over Egypt and enslaves the mortals, knowning there's little hope of being saved, one mortal hero decides to help steal the eyes of Horus back in order to gain the trust of the cast out god. To take the kingdom back (and save Bek's love), he and Horus face vast armies of mortals and immortal demons cast under Set's spell.

By Sean O'Connell
OK
It takes a half hour before you're able to put a finger on the tone and tactic of Baz Luhrmann's Australia. First steps are taken on shaky legs until the sweeping picture hits its stride. After that, you're given an additional two-and-a-half-hours to determine whether or not you like what's attempted.

At 165 minutes, Australia is ambitious to a point -- and then, to a fault. You can actually point to two movies jockeying for position on screen (well, one full story and the seeds of another). And while I quite liked the primary story, the third-act coda struck me as fodder for a potential sequel I wasn't prepared to sit through at the time.

By Joel Meares
Excellent
Writer/director Gregor Jordan's Two Hands is a brilliant little film; what we Aussies might call a "ripper." Preceding the more sophisticated Aussie thriller Chopper by just a year, it announced the beginning of the Australian film industry's obsession with crime. Not quite as stylish as Dirty Deeds or as hilarious as Gettin' Square, Two Hands deals well in both these traits, adding to the mix grit, suspense, and true romance.