Out Now: US Album Releases - The Game Enlists Some Big Competitors; Can They Stop Bruno Mars From Going Stratospheric Again? 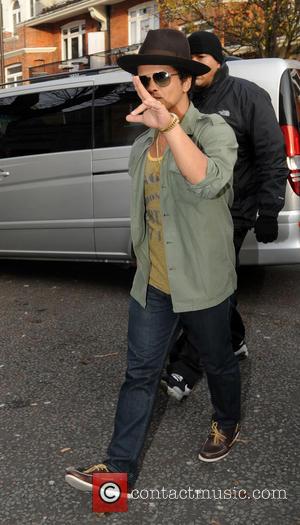 Last week saw the mighty talents of Alicia Keys displace Rihanna’s Unapologetic from the top of the Billboard 200 in a big way, with the former holder of the number one spot falling down to sixth. Girl On Fire was Keys’ fifth number one record in the States, taking in sales of 159,000 on its way to the top spot. Those are solid figures to be sliding off coming into the new weekend, but will they be enough to hold on? The good news for Keys is that, with Christmas approaching, new releases are thin on the ground. The bad news is that one of them’s the new Bruno Mars album.

Yes, though he may appear to physically have the consistency of candle wax, Mars has written a darn fine second album, with Unorthodox Jukebox a canny exercise in carefully choosing the right combination of influences to click together; allayed with the Grammy Award-winning star’s penchant for a big whole-hearted chorus, we can see this doing just as well as his 2010 debut Doo-Wops & Hooligans, which went on to sell over six million copies worldwide including 1.7 million in the States.

Read our review of Unorthodox Jukebox

After that it’s really very hard to see any other release that could seriously threaten Mars. Even Green Day seem to have lost interest in promoting the third of their quickly-released trilogy, iTre!. However, with the previous two iUno! and iDos! both managing top 10 positions on release – the former notching sales of 230,000 in the US - there might yet be some chart success for the grizzled punk veterans again, thanks to their devout fan base.

We’ve got a respect for Big Boi’s solo work over here at Contact; at its best it approaches the upper echelons of his work with Andre 3000 as celebrated rap duo Outkast. With his previous solo LP Sir Lucious Left Foot reaching third spot on the US Billboard 200, hopes must be high for the 37 year-old for similar success with follow-up Vicious Lies And Dangerous Rumors. Like its predecessor, the album’s run-up has been blessed with a series of good reviews. Featuring collaborations with Killer Mike, Kelly Rowland and Ludacris among others, we could see it make another assault on the top 10.

Watch the video for Big Boi's 'Mama Told Me'

Before we hang the medal round Mars' neck though – so to speak – there is one more serious contender. You cannot deny The Game’s commercial pedigree: Only one of the former G-Unit member’s last four albums has failed to hit top spot in the US, with even 2008’s Lax coming in second on release. Jesus Piece is his second LP back with Interscope records and, though there are perhaps other rappers being more critically lauded in 2012 at the moment, the 33 year-old’s commercial pulling power is hard to beat. He could well spring a surprise, especially with the might of Kanye West, Lil Wayne and Jamie Foxx on his album.

Watch the video for The Game's 'Celebration'