If true, it would be the second time that the 'Uptown Funk!' singer has had the honour, following his performance in the 2014 edition.

Following his spot on one of the biggest pop hits of all time in the last 12 months, R&B / pop star Bruno Mars has apparently been asked by the NFL to perform during the Super Bowl half-time show for the second time in his career, according to reports by multiple media outlets.

Since he last took on the prestigious honour in 2014, Bruno has featured on Mark Ronson’s ginormo-hit ‘Uptown Funk!’, which has been almost certainly the biggest hit of the decade so far and spent an incredible 14 weeks on top of the Billboard Hot 100. Insiders familiar with the situation are indicating on Wednesday (September 9th) that this extraordinary success has persuaded the NFL to extend their invitation for a second time. 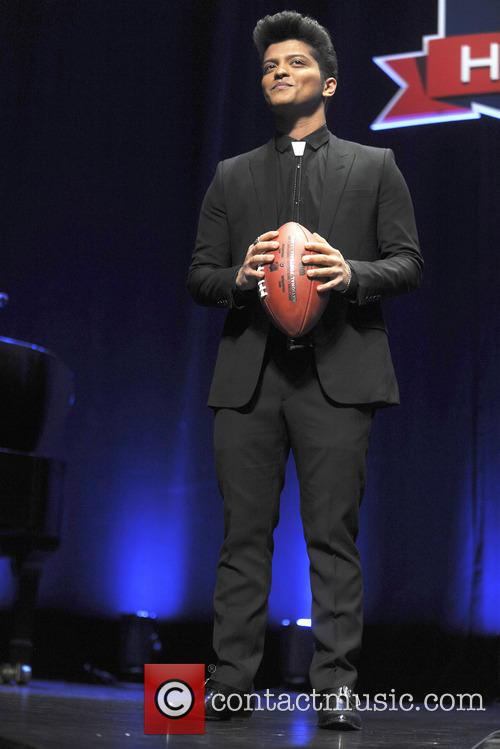 The 29 year old star’s performance during the Super Bowl two years ago, which featured a guest appearance by Red Hot Chili Peppers, was the most-watched half-time show ever with 115 million viewers, before Katy Perry (and Left Shark) did even better this year with 121 million.

Billboard reports additionally that Bruno Mars has not only been asked to perform, but has also been offered the chance to “curate” the entire show, meaning that the guestlist of performers and collaborators would be entirely down to him.

The reason for Mars getting another opportunity may be personal, with the NFL’s director of media events Sarah Moll telling Billboard back in December that she was a huge fan of him anyway. “Myself and our producer, Ricky Kirshner, were both personal fans of Bruno and had seen him in concert and knew what he could do,” she said. “And it was a lot of just telling folks here and getting folks excited about Bruno and taking them to shows and letting them see what he could do. And that's kind of what got it going.”

Super Bowl 50 (the NFL is apparently ditching the Roman numeral ‘L’ for next year’s show) is taking place on February 7th, 2016 in Santa Clara, California. Though no official confirmation has emerged from the NFL at the time of writing, one has to believe that, for such a momentous occasion, Bruno Mars would be sure to be just one of many high-profile performers.