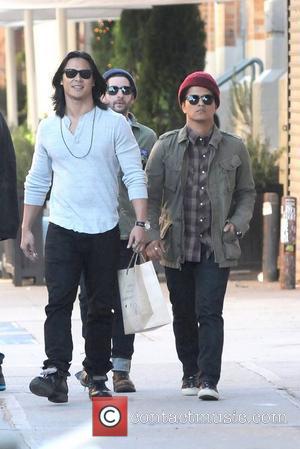 Bruno Mars, Carly Simon and Trent Reznor were among the winners at the annual American Society of Composers, Authors and Publishers (ASCAP) Pop Music Awards on Wednesday (18Apr12).
Mars' anthem Just the Way You Are won Song Of The Year at the Los Angeles prizegiving, while Katy Perry was recognised for her string of chart-toppers, including Last Friday Night (T.G.I.F.) and Firework.
Nine Inch Nails star Reznor, who composed the score to the U.S. movie The Girl with the Dragon Tattoo, landed the Ascap Golden Note Award, which is handed to songwriters who have reached extraordinary career milestones.
He tells The Hollywood Reporter, "That compliment means a lot to me (because) songwriting is a thing that I feel like I'm just getting started. I'm really starting to get the hang of it but every day is a new lesson. I'm a student here and to receive this kind of acknowledgement, it feels nice."
Simon was handed one of the industry's highest honours, the Ascap Founders Award, while Peter Frampton landed the Ascap Global Impact.
But it was Max Martin, who has worked with stars including Ke$ha and Britney Spears, who walked away with the top prize - he was named the Ascap Pop Music Songwriter of the Year.