Bruno Mars found it ''sexy'' to sing about a woman's intimate area on his hit 'Locked out of Heaven'. 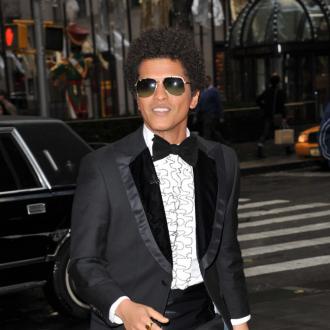 Bruno Mars finds it ''sexy'' to sing about a woman's intimate area.

The singer's hit 'Locked out of Heaven' is about a woman's most private parts and he doesn't understand why anybody would consider such a subject taboo.

''The verses to me are what really makes that song: 'Swimming in your water is something spiritual'.

''If you think it's blasphemous, then obviously you don't know that it's poetry.''

When asked what he believes the secret to a good song to be, he added: ''For me? Hypnotise me in the very first three seconds, wake my ear plate up, give me something that I haven't felt before - and then punch me in the f***ing face.''

Bruno was arrested in Las Vegas in 2010 and charged with cocaine possession, but managed to escape prison, and he admits his actions at the time were ''dumb''.

He said: ''I was young, man! I was in f***ing Vegas. I wasn't thinking. I was given a number one record and I'm out doing dumb s**t. I was really intoxicated. I was really drunk.

''You've slaved away for years and years and years. You've prepped your whole life. It's all you know how to do. You're a kid experiencing life in f***ing Sin City, and that was the lesson: It can all be taken away. Put you in a weird place. Embarrass you.''