Review of Doo-Wops and Hooligans Album by Bruno Mars

To say Bruno Mars took the world by storm last year would be an understatement. Nominated for seven Grammy Awards this year, having his debut single reach #1 in over 10 countries, and having worked with huge stars such as Travie McCoy and Hayley Williams, Bruno Mars now releases his first full studio album, giving us an insight what to expect from this Hawaii-born singer. 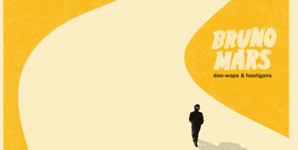 Bruno Mars is one smooth criminal. His songs are able to get even the hardest of hearts melt. Just the Way you are is the prime example. Considered one of the biggest hits of 2010, this song was the song that every girl wanted their boyfriends to sing to them, or vice versa. Cotton-candy lyrics and sweet melodies are continued throughout this LP. Grenade, his second single off the record, is both tribal and haunting, to establish a beautifully tragic track. The kushy romantic traditions continue here whilst Bruno's vocals really do shine along. From the simple to the anthemic, Marry You is an epic and ambitious production that is a sure fire hit; all equipped with the lyrics and great echoing wedding bells to make any young lover fall to their knees.

However, it's not all about making commercial pop smashes for Bruno Mars. He sticks to old-funk practices, and dare I say it, he sometimes comes across sounding like a young and modern Michael Jackson. Our First time, whilst suffering from the syndrome of sounding like it would appear in a hotel lobby, is a sleek and sexy track that simply melts into oblivion; like the, as he sings about, 'ice-cream on a sunny day'. Similarly, the frantic uptempo Runaway Baby is a Motown and soul-funk influenced track, of which you can't help but move your shoulders to. These are old-school sounds being given a modern twist to create something purely magical.

There is everything on this record for everyone. The Lazy Song, as its title suggests, is an idle Jason Mraz-esque track (similar to Count on Me, which becomes essentially a twin copy sadly), probably influenced from Mars' duet with Travie McCoy, Billionaire, whilst Liquor Store Blues shows a gritty and urban Caribbean track; a truly brilliant collaboration with Damien Marley. With the recent Bajan success of Rihanna, it seems like this may be an emerging 'sound' of 2011' that we can expect from other artists. However, the title for best track easily goes to Talking to the Moon, a stunning ballad that sounds like it would've been written for the likes of Christina Aguilera. Poignant and plaguing the consciousness, this is truthfully captivating.

This album really does show real strength for a resilient career ahead. Bruno Mars tends to play it safe on certain tracks, but this is expected on a debut offering. This record is a real mixed bag of the lyrical, funk, and folk; therefore possibly causing critics to suggest that Bruno Mars may not truly be knowing what sort of artist he may want to be yet. But, if this is anything to go by, he seems like he has a lot of time ahead to figure this out. When his debut single first emerged, I personally slammed the track. Well Bruno, you proved me wrong and I take it back. This album is pure pop perfection; Bruno, we love you just the way you are.