The teaser trailer for 2015's 'Vice' is really running with the 'new' idea of a female action lead, teasing a fairly interesting movie.

Imagine a world where any possible crime or vice is legal. In the virtual city resort of VICE, that world is a reality. The resort allows for people to do whatever they, including murder their fellow man. Although this isn't strictly true, as the other people (and targets of abuse) are all robots. So, less 'The Purge', and more 'West World'. After a young woman (or a robot designed to look like a young woman) is killed, her memory is wiped and she is dropped back into VICE to do it all again. But the memories begin to slowly come back to her, leading to her and a patron (who is strangely obsessed with her) turning around and trying to bring down the system.

It's refreshing to see an action movie with a female protagonist even despite there being a steadily growing number of these. But while the stunt casting of Angelina Jolie in 2010's 'Salt' - a film originally intended to star Tom Cruise in the title role - and the brilliant work of Scarlett Johansson in this year's 'Lucy' - a film intended to test the waters for, or possibly call out the lack of, a 'Black Widow' movie - 'Vice' seems to have a female action hero for the purposes of really ushering in the new age of female action heroes.

More: Who Is Bruce And Demi's Daughter, Scout Willis?

Thomas Jane's line "Not bad. for a Robot.", is said in a way that makes it clearly apparent that the film is using the idea of a robot kicking butts and taking names, being as surprising to the older male action hero co-stars, as it is for a woman to be kicking butts and taking names is for the old fashioned male audience. To drive the point home, Bruce Willis - for a long time the embodiment of the 'modern' action hero - is on hand here playing the villain. While its not, obviously, the first or only female driven action movie, its presence it refreshing none the less. 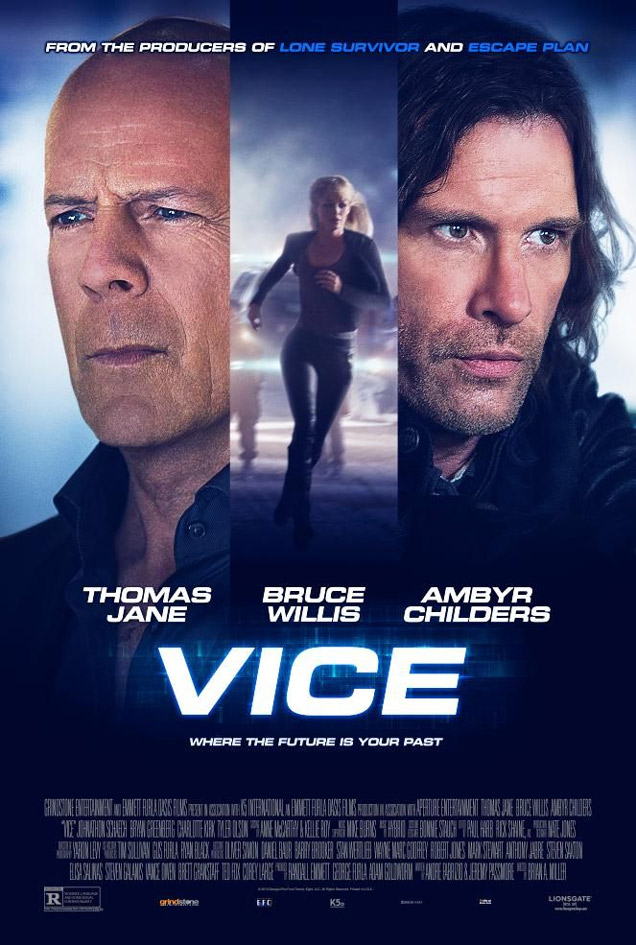 Thomas Jane, Bruce Willis and Ambyr Childers in the poster for 'Vice'