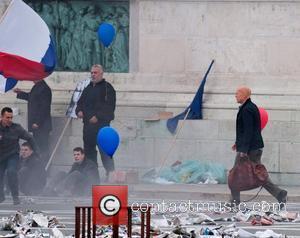 Bruce Willis and Demi Moore's daughter Scout has turned down an offer to plead guilty after she was arrested on suspicion of underage drinking.
The 20 year old was picked up by cops after allegedly drinking beer at New York's Union Square on Monday (04Jun12) and handing police a fake ID card.
She was charged with two misdemeanours on Tuesday (05Jun12) but turned down the state's offer to enter a guilty plea, as it would land her a permanent criminal record.
Scout's lawyer Stacey Richman tells People.com, "It would be outrageous to mar a person that's clearly going places - clearly seeking to have a career... with a criminal record. The goal is clearly a non-criminal offer."
Richman went on to describe her client as "clearly intelligent" and "devoted to her studies" and branded the arrest "ridiculous", adding, "Seriously, you were underage once... who wasn't looking to get into a bar?"
Willis was released without bail on Tuesday and is due back in Manhattan Criminal Court on 31 July (12).