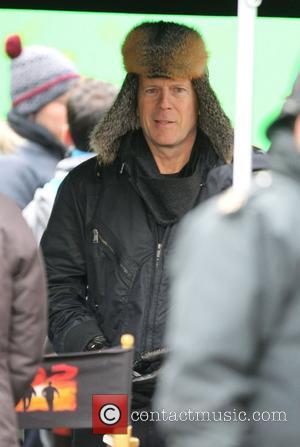 Picture: Bruce Willis filming scenes for the new movie 'Red 2' off Hatton Garden, a side street is turned into Moscow for the filming. London,...

There’s no messing about on the new A Good Day To Die Hard, and there’s no lack of awareness that this is a much-loved franchise being brought back for another hurrah either, with the triumphant orchestral bombast of Beethoven’s Symphony No. 9 blasting out over scenes of high paced action. This is the fifth installment of the long running Die Hard series, and it once again features Bruce Willis as John McClane.

This time things are a bit different though, with McClane’s son (played by Jai Courtney) being held in a Russian prison. McClane senior bobs across to the former Soviet powerhouse to get his young ‘un out of jail, but – McClane being who he is – things don’t pan out so smoothly and he becomes embroiled in a terrorist plot. The emphasis on the new trailer is clear big, brash and modern, a clear attempt to try and bring the late 80s action hero up to speed with the technology whizz and bluster of the 21st century. Adding in a son brings a much needed new element to the story – Willis is getting on a bit let’s be honest, and they realize that he can’t be a one man ass-kicking machine forever (although don’t be fooled – he still puts in plenty of the graft.) The film comes out on February 14, 2013 (perfect Valentine’s Day watching!) in the US. See the trailer below.