Bruce Willis 'unbearable' to work with

Bruce Willis admits he becomes ''unbearable'' to work with when he's away from his wife Emma Heming and their 15-month-old daughter Mabel Ray. 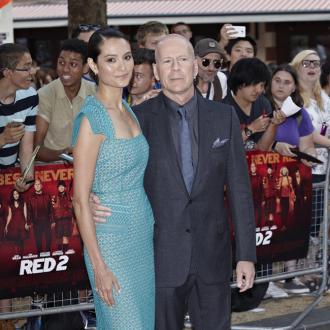 Bruce Willis is ''unbearable'' to work with when he's away from his family.

The 'RED 2' actor insists his wife Emma Heming and their 15-month-old daughter, Mabel Ray, join him when he is on location, because he just can't bear to be away from his girls.

He told BANG Showbiz: ''I'm fortunate that I get to bring my family with me when I travel. It would be impossibly unbearable for anyone I'm working with if I didn't have my family with me. I'd just be moaning about that. I have a little baby and I like to hang out with her every day.''

The doting father and husband - who also has three daughters, Rumer, 24, Scout, 22, and 19-year-old Tallulah, with ex-wife Demi Moore - isn't sure what makes his marriage to Emma works, but feels it's important to pay attention to your spouse.

He explained: ''Attention must be paid to your family and your friends and how you treat them. I don't think there's anything more important than that.''

The action movie legend - who is known for his hard-man character John McClane in the 'Die Hard' films - also reveals that he no longer does his own stunts for fear of being ''scolded'' by his wife.

He added: ''I do let the stuntmen take over. I don't do that many stunts. I would do the stunts if I could but I'm not allowed to ever, ever - they hurt. I wouldn't mind being hurt. I mean, I get hurt all the time, but I'll get scolded [if I do them].''