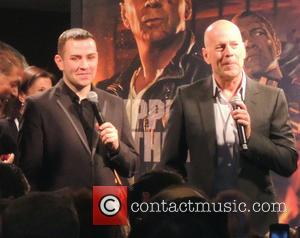 Bruce Willis and his A Good Day To Die Hard co-star Jai Courtney thrilled fans by attending a special marathon screening of the action movie franchise on Wednesday (13Feb13).

The stars posed for photographs and gave interviews at the AMC Empire 25 cinema in New York City, where 500 fans had gathered to enjoy the all-day Die Hard Marathon before a special advance screening of the fifth film.

Willis shot to stardom in the 1988 original and the latest release comes 25 years after the first Die Hard.

A Good Day To Die Hard is released worldwide on Thursday (14Feb13).