Springsteen Stunned By Viral Spread Of Photo With Engaged Couple 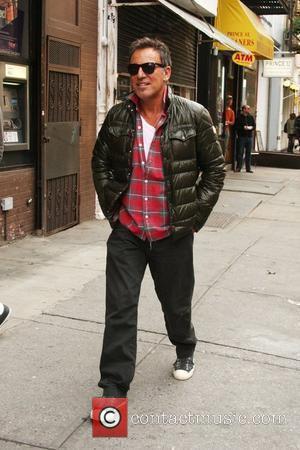 Bruce Springsteen had no idea he would become headline news across the world after posing with a newly-engaged couple for a few photos, joking the husband and wife-to-be have launched TV careers on the back of the snaps.
The Boss delighted Ed Dwyer and Jennifer Smith when he agreed to have his picture taken after they met the rocker on a beach in Manasquan Inlet, New Jersey in September (10).
The photo, showing Springsteen smiling and holding a guitar alongside the happy pair soon emerged online - and the rock icon is stunned by how quickly the news spread.
Springsteen says, "This is me enjoying a late afternoon in one of my favourite hiding places... This gentleman came down playing this guitar and I believe I said something like, 'Play that thing, it's good for ya'. And then he said, 'No, you play it'. So I took it for a second.
"Then he told me he was getting married, they were about to get hitched and they had a photographer with them taking pictures on the beach. He asked if they could take a picture and I said, 'Sure.'
"But then it went viral and it's an international incident. These people were actually on (U.S. breakfast programme) the Today show. These people now have television careers based on this picture! No, they're very lovely and I wish them both the best. I didn't play anything really, I just posed with the guitar for a minute.
"I guess if you stumble across the Easter bunny you have to tell somebody!"