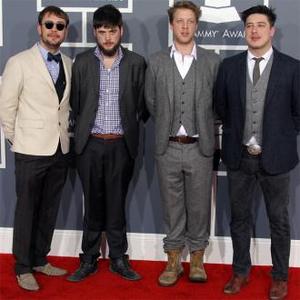 Mumford & Sons will release their new album on September 24.

The British folk band revealed in an interview with Dutch pop/rock radio station 3FM that their hotly anticipated follow up to 'Sign No More' is almost complete.

The group have once again collaborated with producer Markus Dravs on the record and frontman Marcus Mumford previously revealed they were in no rush to finish it because they wanted to make sure it wasn't ''s**t''.

He said: ''I think we just want the songs to be good, and to sound right, and to feel like we've expressed everything as straightforwardly and honestly as we can. We're done recording it. But if we listen back while we're mixing and discover it's shit, we'll just start again.''

Meanwhile, Mumford & Sons -which also includes Ben Lovett, Country Winston Marshall and Ted Dwane, were shocked when Bruce Springsteen invited them to join him onstage at the Pinkpop Festival in the Netherlands last night (28.05.12) for a rendition of 'Hungry Hearts'.

Immediately following the show, keyboardist Ben took to tumblr saying: ''The Boss called us up spontaneously to the stage to sing Hungry Heart with him in front of 60,000 people in Holland last night. I am writing and sharing this mostly because I'm hoping it'll help me come to terms with the fact that [it] actually happened''.