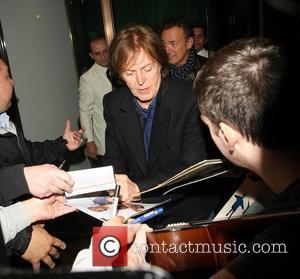 Organisers of a London music festival have defended their decision to shut down Bruce Springsteen's set after he broke a curfew, blaming the move on health and safety rules.
The Boss took to the stage to headline the Hard Rock Calling event in London's Hyde Park on Saturday night (14Jul12) and at the end of his three-hour show, he brought out Sir Paul MCCartney for an encore.
The pair played two songs, but they were cut off when festival bosses turned off their microphones in a bid to stop the gig from over- running.
Springsteen's E Street Band bandmate Steven Van Zandt criticised the move on Twitter.com and now Hard Rock Calling organisers have explained why they took such drastic measures.
A post on the event's website reads, "It was unfortunate that the three hour plus performance by Bruce Springsteen was stopped right at the very end but the curfew is laid down by the authorities in the interest of the public's health and safety. Road closures around Hyde Park are put in place at specific times to make sure everyone can exit the area in safety."
London Mayor Boris Johnson has also spoken out to criticise the concert organisers, saying, "It sounds to me like an excessively efficacious decision. If they'd have called me, my answer would have been for them to jam in the name of the Lord!"