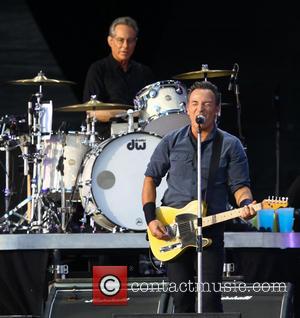 Bruce Springsteen showed his support for the family of Trayvon Martin by dedicating a track to the slain teen during his show in Ireland on Tuesday night (16May13).

The Boss took to the stage in Limerick as part of his Wrecking Ball World Tour and spotted a fan in the audience holding a sign requesting his song American Skin (41 Shots).

Later in the show, Springsteen took the banner from the gig-goer and told the crowd, "I want to send this one out as a letter back home. For justice for Trayvon Martin," before playing the poignant track.

Springsteen wrote the song following the death of Guinea immigrant Amadou Diallo, who was shot dead by four police officers in New York City in 1999. All four were later acquitted.

Martin, 17, was shot dead by neighbourhood watch warden George Zimmerman in February (12). Zimmerman's acquittal last week (13Jul13) has sparked a storm of protest across the U.S., with stars including Stevie Wonder, Beyonce, Rihanna and Miley Cyrus expressing their outrage over the verdict.