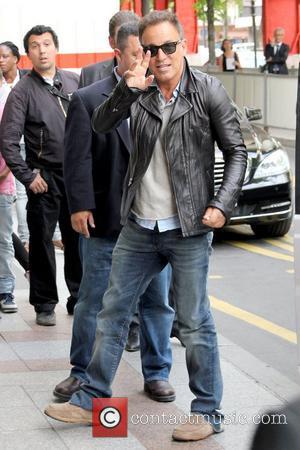 Bruce Springsteen and his daughter Jessica Springsteen shared an intimate father and daughter moment as they danced, just them . with 10,000 screaming fans watching on. The Boss and his E Street Band are currently ploughing a mighty touring schedule and were playing their second concert in the French capital of Paris on Saturday night when the veteran performer invited his daughter onto the stage for classic hit 'Dancing In The Dark'.
Springsteen bringing someone on to the stage for the track isn't new at all, with the star making a regular habit of inviting a member of the crowd up on stage in honour of the 1984 video of the song - which, lest we ever forget, features a then unknown Courteney Cox dancing away with him. However it was a truly lovely surprise to see Jessica up on stage, and the pair enjoyed a good old boogie down together, the 20 year-old handling herself with the sort of aplomb typical of an equestrian rider, even in front of a huge audience.
Springsteen isn't done in Europe until playing Helsinki in Finland on July 31st; then, he and his band will return for another jaunt around the Usa, finishing up with three nights in New Jersey between September 19th and 22nd.