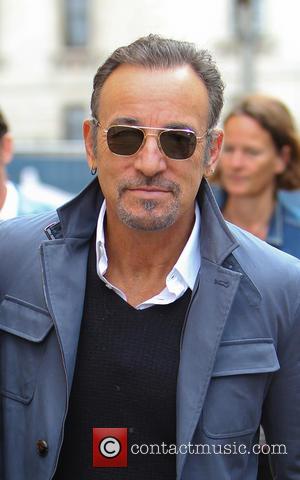 Bruce Springsteen and Chris Martin replaced an injured Bono as the two served as frontmen for U2 at a World AIDS Day concert in New York City on Monday night (01Dec14).

The Irish rocker was slated to perform at the free gig in Times Square, but he is still recovering from a bicycle fall in the city's Central Park last month (Nov14).

The Boss and Coldplay frontman Martin offered to step in and the duo made their debut with the rest of the band, dubbing themselves "U2 Minus 1".

Martin, who wore a shirt with the slogan "Substitu2" sang vocals on the band's hits Beautiful Day and With or Without You, and Springsteen then took the reins on Where the Streets Have No Name and led the crowd in a singalong of I Still Haven't Found What I'm Looking For, which he dedicated to Bono.

Rapper Kanye West also took to the stage for a nine-minute medley of his hits, including Power, Jesus Walks and Black Skinhead, while country star Carrie Underwood sang stripped down versions of her songs Change and Something in the Water.

Former U.S. President Bill Clinton was on hand to kick off the event, and President Barack Obama even addressed the crowd via a video message shown in a giant billboard in the heart of the Big Apple.