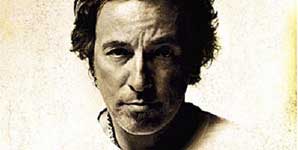 The speed with which Magic follows the Seeger Sessions album has been a surprise for all Bruce Springsteen fans - recorded at the start of 2007, while still pushing the Seeger project, this is his fifteenth studio album. Unfortunately, the speed and even the return of the E Street Band, has not helped this album. Some of the songs still stun, and the album seems to reference a number of previous discs - The Rising and Devils and Dust mainly - but it also has a few tracks that would have previously only made it to the Tracks collections of outtakes. Your Own Worst Enemy and Girls In Their Summer Clothes are among the weakest songs that Bruce Springsteen has ever recorded, and others seem rushed to disc ahead of their time, with so-so lyrics.

The variety of styles recalls (the underrated) Human Touch or The Rising - having started strongly with Radio Nowhere, and the excellent You'll Be Comin' Down, the mood swings to New Jersey shore soul with Livin' In The Future (like a River outtake) before Side 1 (on the LP) goes to pot. Side 2 is a lot better - I'll Work For Your Love, Long Walk Home and especially Last To Die (the last two the only overtly political songs) are excellent. The song that closes the disc, Broke The Mould, is unlisted, and refers to a friend who died recently. It is one of the best songs on the album. In the Bruce Springsteen canon, Magic is sadly not one of the classics - it is less Rising II than Human Touch II.