The Boss' renaissance period continues in the shape of Wrecking Ball, his performance at Glastonbury in 2009 was one that introduced him to a new generation of fans and his well-received releases since that successful headline spot have helped to keep that interest a healthy and long lasting one. 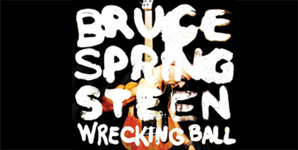 As an artist, Springsteen is often misunderstood, dismissed ignorantly as corny, yet he is a lyricist with plenty of purpose and guile. As political a song writer as you will find, Springsteen is constantly commentating on American culture and life, and more often than not, damming in his assessment. Wrecking ball is no different; billed as his critique on the financial crisis currently hanging like a dark storm cloud over his native land, it is uneven in its temperament and provides a less than smooth drive to its chaotic conclusion.

The Piano driven Jack Of All Trades is perhaps the most angry and literal of Springsteen's swipes at the US political landscape, 'If I had a gun, I'd shoot the bastards' - pretty stern stuff! This no punches pulled ethos is a theme continued throughout, as attacks on bankers and greedy money men are spliced with sympathetic words towards the common working man. This formula consistently makes up the main lyrical emphasis of the album's body of work. Easy Money is no different, as Springsteen compares the crimes on the street with those of city bankers. At this point of the record I became convinced that he does not watch the Apprentice USA.

Musically, Wrecking Ball is a mixed affair; it would be difficult to pin down one particular sound. Rocky Ground features synth and some beats, while other tracks such as Land Of Hope And  Dreams showcase the flamboyant use of saxophones. Obviously, guitars rule the roost when it comes to Springsteen, but Wrecking ball has to be his most experimental record to date.

What makes Wrecking Ball such a success is its passion, at no point does it let up in its scathing approach to social commentary; it deals with current issues and doesn't sit on the fence when doing so. It's a downbeat album but it has to be, there is nothing positive to be said within the issues that Springsteen is dealing with and this is reflected in the music itself. Musically, it's robust throughout, chopping and changing to fit the mood of each track's lyrical content, giving it a diverse and dimensional after taste but never as a novelty.

Ultimately, Wrecking Ball is a continuation of Springsteen's successful run of albums in modern times; it's both relevant and entertaining, qualities that many of his contemporaries have long forgotten how to maintain.