It seems fitting that Bruce Springsteen has chosen to bookend his worldwide Wrecking Ball tour with another studio album. His eighteenth record 'High Hopes' picks up on many of the same themes of triumph over adversity as its predecessor. While it may lack the narrative cohesion of earlier releases, it acts as a companion piece and a meditation on his work over the last two decades. 'High Hopes'' genesis as a collection of reworked off cuts and covers shouldn't undermine its importance within the 64-year-old's back catalogue either. It features the final posthumous appearances of saxophonist Clarence Clemons and organist Danny Federici; two members of the E Street Band who have received touching tributes during recent live sets. 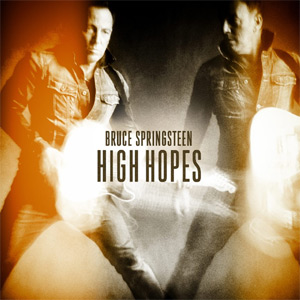 Springsteen describes the twelve tracks found on 'High Hopes' in an affectionate way: "I felt they all deserved a home and a hearing." To be honest, I'm not going to disagree with that sentiment. There is value to what's here and the fact that it doesn't quite overcome its patchwork quilt nature as a compilation of songs written over a long period and recorded with varying musicians around the world just adds to the charm. The revolving cast includes contributions from members of his current touring band, the core E Street Band members, his children and, most notably, Rage Against The Machine's Tom Morello who filled in for Steven Van Zandt during last year's Australian shows. Springsteen was already putting together a record of lost gems, but it seems Morello added a spark to the project to make it more than just a curio. Indeed, Morello suggested dusting off the title track which had only seen the light of day on a promotional EP back in the '90s. This time round though, when Springsteen sings, "I want to have a wife, I want to have some kids, I want to look in their eyes and know they stand a chance", there's a sense he's making a rallying cry against the financial hardships facing middle America. Elevated from a simple gospel style jam, Morello injects a razor sharp edge with his guitar that breathes new life into 'High Hopes'.

His other major contribution here is the electric reworking of the previously quiet and unassuming 'The Ghost of Tom Joad'. While the song has been transformed on the road in the past, this is a rare example of a studio recording with a shared lead vocal. Again, Morello's guitar makes the song feel more contemporary and defiant revealing its thematic similarity to 'High Hopes'. It's also interesting to see the most impressive solo on the whole record featured on a track that is essentially a folk song. However, Springsteen succeeds in his endeavours even when Morello isn't in the spotlight. 'American Skin (41 shots)' which has been sitting in the vaults for years is a timely criticism of US gun laws, following the Trayvon Martin case. Even 'The Wall', which deals specifically with a soldier that didn't return from Vietnam, taps into a sense of loss renewed by more recent conflicts.

The less familiar songs here don't fail to deliver either. For example, 'Down In The Hole' is a more contemplative successor to 'Shackled And Drawn'. The Saints' 'Just Like Fire Would' keeps its punk rock heart beating under the horns of the E Street Band. The other key track on the record is 'Hunter Of Invisible Game'. It's a song that would have fitted well on previous album 'The Rising' with its biblical allusions, yet Springsteen finds hope in the darkness which helps to illustrate that all the songs here are spiritual cousins in one way or another.

While much of 'High Hopes' is essentially re-treading old ground, it's not ashamed that it's doing so. That's perhaps why it doesn't feel like a needless detour, Springsteen has much to say about the current political climate and, this state of the union, doesn't tell us anything new, but it's important nonetheless. It shows that he still has something valuable and optimistic to tell us despite the loss of two key members of his band. Where he sets his sights next is anyone's guess, but 'High Hopes' demonstrates that his cupboards are far from empty.