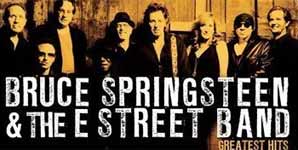 Unsurprisingly, The Boss's new album is released to coincide with his UK tour and appearance at Glastonbury. With at least two fairly comprehensive Greatest Hits compilations available already, this particular album release points to Sony trying to squeeze some more profit out of the sold-out tour. The '2009 Limited Tour Edition' sticker on the case leaves little doubt behind.

In terms of content, it's fairly condensed considering Springsteen has a career that has spanned nearly 4 decades now. There are just 16 tracks on the album (two bonus live tracks) meaning it only cherry picks a few of his best known songs, obviously revised to include some new material that will feature in the live sets.

The main problem here, of course, is that it seems a little unnecessary. It has nothing to offer the more die-hard of fans, and even for those just getting into him (if such people exist) it plays it fairly safe. That's not to say there's nothing at all to enjoy, Glory days obviously, Badlands, Born in the USA are all winners. But to think of the tracks that AREN'T on here: Atlantic City, Devils and Dust, Oscar-winner Streets of Philadelphia; it just doesn't seem to do quite enough justice. I suppose anyone unaware his true genius could buy this album purely for the magical Thunder Road, and hear Roy Orbison singing for the lonely in one of the most epic, heartfelt songs ever written.